Our research is focused on the study of cancer from a genomics perspective. We are particularly interested in the identification of cancer driver mutations, genes and pathways across tumour types and in the study of the mutational processes across tissues and genomic regions. 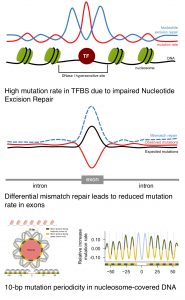 Tumour genomes contain thousands of mutations, which can be identified by Next- Generation Sequencing technologies. By studying the observed pattern of these somatic mutations across genomic regions, we are able to explore the basic cell mechanisms that produce them. The interplay between these mechanisms, such as internal and external insults that damage DNA, chromosomal replication, transcription, and DNA repair mechanisms, leads to mutational processes that give rise to heterogeneous patterns of somatic mutations across the genome.

We have also showed that differential mismatch repair leads to reduced number of mutations in exons (Nature Genetics 2017). We propose that the enhanced activity of mismatch repair in exons may be driven by the higher exonic levels of histone marks (H3K36me3).

More recently, we have discovered that nucleosome covered DNA shows a 10 bp periodicity on the rate of somatic and germline mutations. This periodicity tracks DNA minor groove facing toward and away from the histones, and we propose that this has contributed to the AT/CG 10-bp periodicity in eukaryotic genomes (Cell 2018).

Many cancer therapies produce mutations in surviving tumor and healthy cells of the patient. By analyzing more than 3500 whole-genomes of treated metastatic patients we uncovered the mutational footprints (or mutational signatures) of commonly used cancer treatments. These signatures allowed us to measure the mutational toxicity of these treatments across patients and organs (Nature Genetics 2019)

Cancer is mainly a genetic disease. It is caused by genomic alterations that confer somatic cells competitive advantages over neighbouring cells in the same tissue. The genes affected by these alterations are commonly referred to as cancer drivers because they drive the abnormal growth of malignant cells. Recently, important international initiatives have sequenced the exomes and genomes of thousands of tumours belonging to different types of cancer. One of the main goals of the colossal effort channelled into this endeavour is the identification of cancer driver genes and, more recently, also potential driver non-coding genomic elements, such as promoters, enhancers, and non-coding RNAs.

Given that genomic alterations in driver genomic elements are positively selected in the course of tumorigenesis, an effective approach to detect these elements is to find signals of positive selection in their mutational patterns. In recent years, as part of the aforementioned initiatives, we have built bioinformatics tools to identify genomic elements that bear signals of positive selection in their mutational patterns across cohorts of tumours. We call this suite of methods Oncodrives. Using a combination of some of these methods, and others on large pan-cancer cohorts of tumours, we produce comprehensive and reliable catalogues of cancer driver genes. This information is available online at intogen.org

Precision medicine—understood as the ability to prescribe anti-cancer drugs that specifically target driver alterations in a given tumour—as opposed to traditional chemotherapeutic approaches is an emerging paradigm in clinical and translational research in oncology. The possibility to associate the alterations observed in a patient’s tumour with suitable anti-cancer therapies relies heavily on our ability to accurately identify the alterations that drive the malignancy, as well as those that predict its sensitivity or resistance to drugs.

Our lab seeks to contribute to the advancement of precision medicine, in particular the interpretation of the genomic variants of tumours, thus facilitating the identification of therapeutic options for cancer patients. With this aim, we have developed an approach and several bioinformatics resources to accurately interpret alterations in human tumours. This approach is available at CancerGenomeInterpreter.org.